Transparency Market Research has published a new report titled, “Automotive Turbocharger Market – Global Industry Analysis, Size, Share, Growth, Trends, and Forecast, 2018–2026”. According to the report, the global automotive turbocharger market is anticipated to surpass US$ 34 Bn by 2026, expanding at a CAGR of more than 5% during the forecast period.

The market is expanding at a significant rate, as a turbocharged engine of a vehicle offers several advantages over a conventional engine, such as lower emission of exhaust gases owing to better combustion of the air-fuel mixture in the combustion chamber, higher power, and enhanced fuel economy. Stringent emission norms are a major factor driving the automotive turbocharger market, as it helps vehicle manufacturers to comply with emission norms. Countries such as China are levying low excise duty on small engines, thus boosting the adoption of turbochargers, as automakers can deliver high power with a small engine. 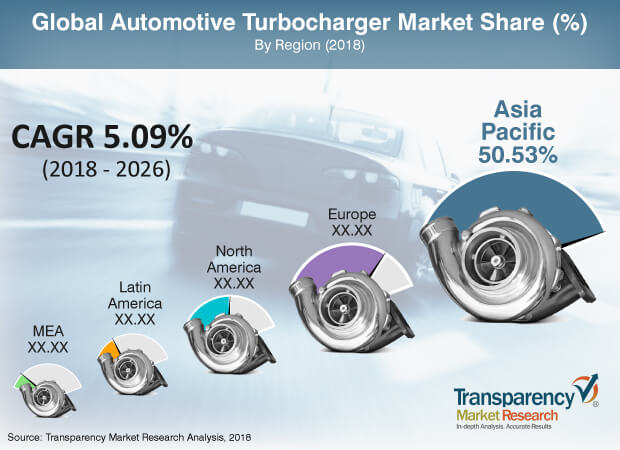 The automotive turbocharger market in Europe is mature due to the presence of a high number of diesel vehicles in the region. However, the diesel engine segment of the market is expected to contract during the forecast period due to higher emission levels of diesel engines, discouraging their sale. The gasoline segment is expected to expand at a considerable pace during the forecast period.

In terms of operation, the e-turbocharger segment is expected to expand at a high growth rate during the forecast period. Turbo lag is eliminated in e-turbochargers, as they are driven by an electric motor. Moreover, they generate electricity, which assists the alternator, thus further helping the engine to achieve better fuel economy.

Rise in sale of luxury and high speed vehicles is expected to boost the demand for twin turbo type turbocharger. The VGT/VNT (Variable geometry or nozzle turbocharger) segment is expected to hold a significant share of the market due to its low boost threshold and efficiency at higher speeds. VGT/VNT turbochargers have been utilized primarily in diesel engines due to their ability to operate in low temperatures. However, development in material technology has enabled their adoption in gasoline engines and hence, the gasoline segment of the market is expected to expand at a steady pace during the forecast period.