The global automotive wiper market is primarily driven by the rise in vehicle production. Expansion of economies of countries in Asia Pacific has boosted the demand for vehicles, which in turn is driving the global automotive wiper market. The global market is anticipated to expand at a steady growth rate of 3% during the forecast period owing to no feasible replacement solution and mandatory requirement of wipers. Shift in consumer demand from sedans to hatchbacks, SUVs, and crossovers is boosting the utilization of rear wipers, which in turn is driving the automotive wiper market. The wiper being a component that experiences wear and tear requires periodic replacement, which translates to a significant aftermarket opportunity. 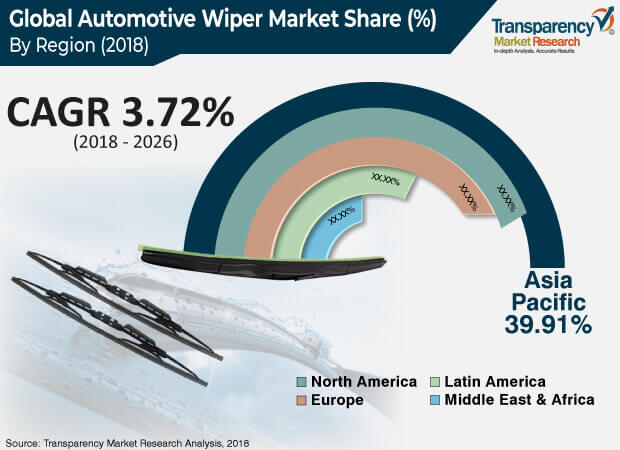 In terms of wiper blade, the beam blade segment held a major share of the global automotive wiper market, owing to their high preference, particularly in North America and Europe. Beam blade wipers provide even contact with the windscreen and have gained high preference among consumers. New vehicles are increasingly being fitted with beam blades and have high OE demand. Hybrid blade wipers are widely integrated in vehicles manufactured in Asia. Hybrid wiper blades are aerodynamic and offer more effective and quiet cleansing. Consequently, the segment is expected to expand at a higher growth rate during the forecast period.