Transparency Market Research  has published a new report titled, “Usage-based Insurance Market – Global Industry Analysis, Size, Share, Growth, Trends, and Forecast, 2019–2027”. According to the report, the global usage based insurance market is anticipated to surpass US$ 200 Bn by 2026, expanding at a CAGR of more than 30% during the forecast period.

Rising demand for accurate quotation of motor insurance among consumers, as a result of rising claims and fraud increasing the motor premium, is driving the Usage-based insurance market. Penetration of UBI is considerably high in Italy and South Africa, owing to high motor insurance cost due to high rate of theft/fraud in these countries. Insurance companies are taking active measures with pilot programs launched worldwide to boost the penetration of UBI.

Declining prices of connecting devices and connected mobility technologies is fueling the adoption of UBI. Demand for appropriate premium charges among consumers is rising, as conventional insurance charges a safe and rash driver equally. The UBI insurance model has variable charges based on the safe driving behavior of the driver and hence, demand for this model is expected to rise in the near future. The motor insurance industry is facing losses due to increasing competition and cost of claims. UBI insurance helps assess better risk and maintain profitability. 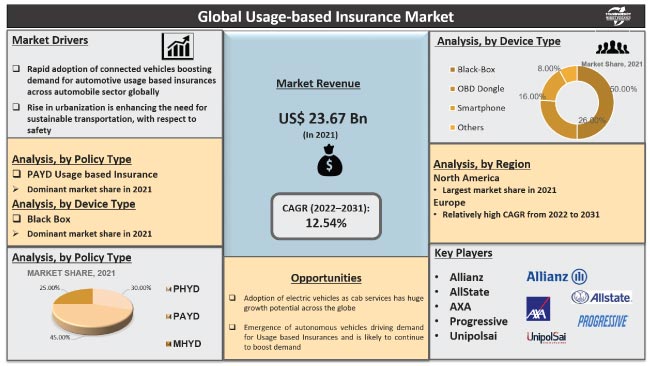 In terms of policy type, the pay-as-you-drive (PAYD) segment held a dominant share of the global market. PAYD is a simple UBI model based on miles driven and hence, is widely accepted. Increasing adoption of telematics and advanced driver assistance features is projected to boost the pay-how-you-drive (PHYD) segment in the near future. PHYD takes into account various parameters such as acceleration, time of ride, route of ride, and sudden braking, and is more effective in gauging the risk of the driver.

Based on device type, the black box segment held a leading share of the global Usage-based insurance market. However, the smartphone segment is expected to expand in the near future, as it is a low-cost solution with no additional investment.